QCP: When did you decide to become a writer?

Ashleigh: I remember a moment as a book-obsessed child where I realized that someone created those books and that I too could do that. The first story I wrote was about a dinosaur, and my mum sewed a cover onto it and everything. Sadly, this opus has been lost to history. So I never really decided, it was just something I have always done.

QCP: Do you write every day? If not, how many days do you dedicate to writing?

Ashleigh: I write every day. Sometimes life gets in the way, but that’s okay. But I try to never let myself stop if I’m feeling blocked or less than motivated. I set a goal of 1000 words per day. It can be anything: part of a novel, a short story, a blog post, or even just an exercise. For me, the more I write, the more I want to keep writing. An object in motion…

QCP: Do you use an outline or do you write free style?

Ashleigh: I almost always use an outline. I think an outline is an example of one of those times where having limits opens you up creatively. Free-style can seem overwhelming and near-paralyzing in the possibilities open to you.

How much I end up sticking to the outline is a whole other matter. On days where words are coming easily, I wander quite far off. On other days, where every sentence is a struggle, my outline is a crutch helping me hobble to that 1000-word finish line. If I waited for the muse every day, I’d never get anything done. And so the outline will often get more and more detailed until I have a very rough draft that I will polish at a later date.

Another reason I need an outline is that my thoughts don’t come to me in anything close to resembling an orderly fashion. Other people I know will get one idea and it will lead consequentially to another, and on and on. I get one idea and it branches out into about twelve, like an evolutionary tree. It makes constructing a linear narrative quite difficult. Things could have gone disastrously quirky for me in life had I not worked incredibly hard to figure out ways to trick myself into organizing my thoughts.

All of this is why about 10% of my time is actual writing and the other 90% is split evenly into outlining and editing.

QCP: What is the hardest thing about writing? 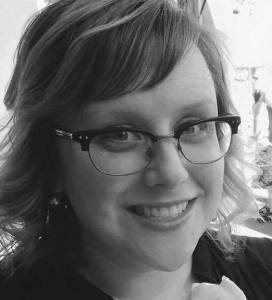 Ashleigh: The actual writing. For the most part.

I love, love, love outlining. And if my outline was solid to begin with, editing goes well too.

However, if my outline was shoddy, editing is a nightmare. For instance, I’m currently finishing up a new draft on a novel I first wrote about four years ago. I never properly outlined it to begin with and the finished draft was a mess. It took a lot of time, wine, and Ibuprofen to figure out what was wrong with it. I’ve done about four or five drafts since then. But I finally think I cracked it. Although, that is not the first time I’ve said that. This book is my statue of David; somewhere beneath all this marble is the story I want to tell, and I just have to keep chipping away. I will probably end up with a pile of gravel, but that’s how you learn.

QCP: What advice would you give to aspiring writers?

Ashleigh: Just get it written. Get that first draft done no matter what. If it reads poorly or isn’t the best prose you can write, that’s fine. That’s what the second draft is for. But you can’t polish what you haven’t written. Do whatever you have to. Set goals. If you’re stuck, change your approach. If using a computer is too distracting, trying scribbling on loose leaf. If you can’t write in the house, go to a coffee shop. Do whatever you have to, but get it written.

And then get it out there. There are tons of independent journals out there looking for content. (Try placesforwriters.com!) Failing that, put it on WordPress or Blogspot or Livejournal or even Tumblr. Be patient but persistent. I’ve had stories that have been rejected repeatedly and then gone onto win contests (like this one!).

But above all that, keep learning. Keep reading and keep writing. Visit bookstores and skim through as many different kinds of books you’d never normally pick up. Read a variety of things: pulp fiction, literary fiction, non-fiction. Learn all the “rules” before you break them: the three-act structure, tragedy, comedy and everything in between. Cultivate self-awareness. Learn your strengths and weaknesses. Learn the difference between someone just not “getting” your work and your work not being good enough. Discover where you figure in the big ole literary world. Try writing different styles and genres and voices. Test yourself. If you keep writing third person, write your next story first person. If you always write a male voice, try writing as a female character, or as a non-binary protagonist. And make mistakes. Make so many mistakes.

QCP: Do you have any books or short stories that will be published soon? If so, please share the details about where readers can find them.

Ashleigh: I have a short story in the speculative fiction anthology Redwing: Speculative Fiction Takes Flight¸ which is available now as an e-book on Amazon.

I am also working on a comedic novel, In What World, which has been a fun romp through genre. (It should be evident by now that I love playing with genre.) The protagonists, Willa and Liz, are Brokers: thieves and smugglers for hire who hop realms, solving mysteries and having adventures along the way. Each realm is a genre – Urban Fantasy, Space Opera, Dystopia – and each realm has Rules. It’s time to see if those Rules can be broken.

It will be published online, one chapter at a time, at lizandwilla.wordpress.com.

My personal blog, sandpaperblues.wordpress.com, also contains links to all my publications.

QCP: Where did the idea for Working Title come from?

Ashleigh: While I’ve always been writing, for the last ten years or so, I branched out a little into film. Film has so many more elements that go into it beyond the written word. There is light, sound, real sets, real people and music! When everything comes together and the collaborations click, film is a perfect example of every creative element being more than the sum of its parts. People can bring things to the work that you never anticipated and it simply sings.

But I felt frustrated with the lack of inner space. A paragraph of meditation is summed up in a glib shrug of the shoulders. Sometimes that’s beautiful. Sometimes you want more. A picture says a thousand words, and film is twenty-four pictures a second. But, to paraphrase something I once read, a great sentence from a great writer can say a thousand pictures.

I was stuck in this strange nether-space between film and prose and was looking for a way to articulate this anxiety I was feeling bouncing between both worlds. The story of Nick and Sofia was something I had been tossing around for a while, but I was coming to the conclusion that the Romanian Revolution was more a story I wanted to read rather than write. I was beginning to feel the limits of my experience. It simply didn’t feel like it was my story to tell. As soon as I struck on the framing device of the filmmaker and his anxieties, it all fell into place.

QCP: How can others learn more about you and your writing?

3 thoughts on “Interview with Ashleigh Rajala”