QCP: When did you decide to become a writer?

QCP: Do you write every day? If not, how many days do you dedicate to writing?

Regrettably, with a busy full-time job, I can’t. I write every weekend and when that is going well, sometimes I edit my writing at nights during the week.

QCP: Do you use an outline or do you write free style?

Short stories I tend to write free style. I have an “idea book” that I write ideas in, subjects or photos or images that strike me, stories I’ve ripped out of newspapers. Then once I have five or six key points on the same theme that seem to go together, I start to write.

QCP: What is the hardest thing about writing?

In writing short stories, it’s knowing when they are done. I constantly play with them, even after they’re published. I am good at getting my stories to the 70 percent mark in terms of quality; it’s the last 25 per cent that’s tough.

QCP: What advice would you give to aspiring writers?

Read a lot. Write a lot. Join a writer’s circle. Join a writer’s federation. Take advice but ultimately follow your own heart. Only you know what you want to say, but be truly honest with yourself about that. 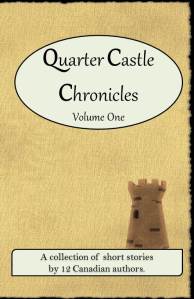 QCP: Do you have any books or short stories that will be published soon? If so, please share the details about where readers can find them.

I have just published a biography of a unique and fascinating Japanese-Canadian doctor from my home town. Rebel With A Cause: The Doc Nikaido Story is a compelling account of how Canada’s shameful treatment of Japanese-Canadians during Second World War impacted Dr. Harry Nikaido.

Turning his back on material things, “Doc” practised medicine in small-town Alberta, living a bohemian lifestyle and charging no more for his services than what he absolutely needed to survive. He adopted a virtual vow of poverty in order to pay little or no income tax over his 24-year career to a Canadian government whom he never forgave for the forcible resettlement of his family and 22,000 other Japanese-Canadians from British Columbia during World War II.

QCP: Where did the idea for The Beggar’s Shoe Box come from?

I’ve worked in downtown Halifax for the past dozen years. A few of the older street people have been panhandling downtown that whole time. I know them all to see them and a few by name. I began to wonder how much they could potentially know about all of us who walk by them most days and the story grew from there.

QCP: How can others learn more about you and your writing?